Fighting Over Management of Euro zone Economy Will Worsen

Greece follows/suffers through strict interpretation of the rules to receive bailout money to hold the entire EU together, while France sees the rules more as a loose set of guidelines for them.

The Commission that monitors national budgets and recommends corrective measures is being increasing accused by thriftier euro zone states (Germany) of being to lenient in applying EU budget rules. France has been running a budget deficit greater than three percent of GDP since 2008 (chart). The Commission's response to this observation was "Because it is France." Meaning France is either too big to fail or unable to perform with the global economy.

Fighting over management of the euro zone economy will only worsen as global economy enters full blown liquidation in 2017. 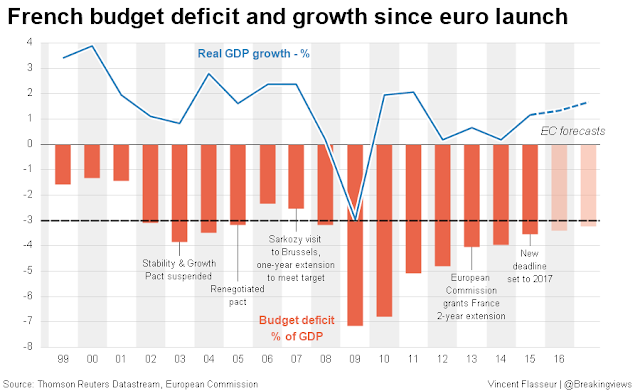 Headline: EU gives budget leeway to France "because it is France" - Juncker

May 31 The European Commission has given France leeway on fiscal rules "because it is France," the president of the EU executive Jean-Claude Juncker said on Tuesday, in a remark that may not go down well in Germany and other more thrifty euro zone states.

The European union is debating how to best apply its fiscal rules, which require a budget deficit under 3 percent of GDP and public debt to fall, at a time when some argue that more public spending would help boost economic growth.

Posted by Eric De Groot at 11:00 AM
Email ThisBlogThis!Share to TwitterShare to FacebookShare to Pinterest
Labels: Europe, France, Germany