Live Cattle's overall trend, revealed by trends of price, leverage, and time, defined and are discussed in The Matrix for subscribers.

I am not an experienced Live Cattle trader, but I can read primary trend alignments and energy builds. Alignment and energy say more about future direction than fundamentals, so listen carefully.

Live Cattle's primary trend has been down for 5 months. This alignment has produced a -10% return. Readers might be saying how could that happen? Like all unexpected outcomes, the loss stems from a bullish energy build that began in spring of 2019.

Participation in Live Cattle appears to be unique. Retail traders follow commercial traders (producers) will incredible consistency. This strong correlation is unique to all the markets tracked in the Matrix. I have no explanation for this observation, other than it exists.

Studying energy builds in the Live Cattle market cannot be completely dependent on DI. The computer assumes that markets are defined by the action of smart and dumb money. If some groups act the same, the delineation between smart and dumb blurs, thus, confusing the computer. If DI is not telling us anything, then we must focus on the producers. The producers turned bullish in the spring of 2019. It's one of the reasons why downside alignment in the primary trend has produced a -10% return.

Cattle primary trend flipped down in July just as commercial traders turned bullish. C WA spiked above 90% in July, in effect, generating a massive support cup, the opposite of blocking dome. The large bullish energy build forced a countertrend rally. Trouble is, the large bullish energy build has completely dissipated and energy is turning bearish. Bearish energy builds appear to form when C WA and NR WA fall below 20%. The longer C WA and NR WA stay below 20%, the greater energy behind the build and pressure on price. Live Cattle bulls, likely sitting on large profits, need to be aware of the growing bearish energy build. 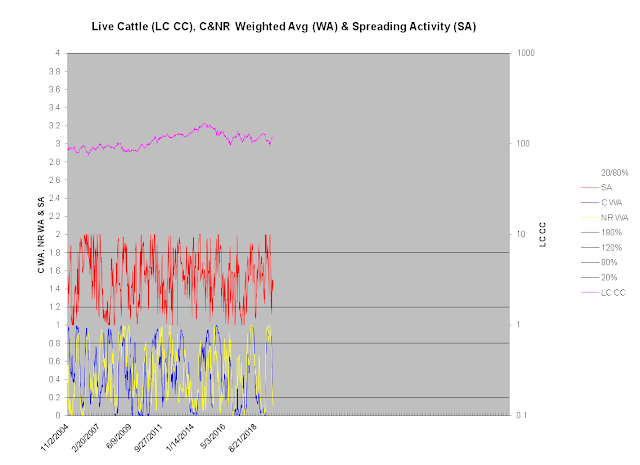