A trending trading topic on social media has to be sentiment. Extreme greed, optimism, extremely low put to call ratios, or some variant of these themes are all the rage right now. The bears are growling about extreme optimism as a precursor of decline or bear market.

The computer sentiment work, however, does not support the bearish argument. The sentiment oscillator (LTSO) is up. LTSO > 0% defines a bull phase. The bull phase is not old, so time is not working against the impulse. WAS, a measure of sentiment concentration, is rising but not extreme. WASo > 1 defines extreme optimism. WASo > 0.5 suggests growing optimism. WASo = 0.35, which suggest the bears could be talking their book or short-term focused. Timing stocks over the very short-term is nearly impossible. That's why bearish or bullish calls often turn in narratives when they don't work.

Playing reactions against the primary trend's up impulse is never a good idea. History proves that, but social media generally doesn't like facts screwing around with its opinions, so its best to log off and follow the Matrix. Optimism is rising, but it has a long way to go before WASo > 1. The last time WASo > 1 was early 2018. I recall pointing out that sentiment had reached an extreme reading, but nobody cared. Stocks were headed to the moon in 2018.

Your total bullish / bearish volume was the most since March 2000. So...wow. pic.twitter.com/sMhG6XMHYa
— SentimenTrader (@sentimentrader) January 11, 2020 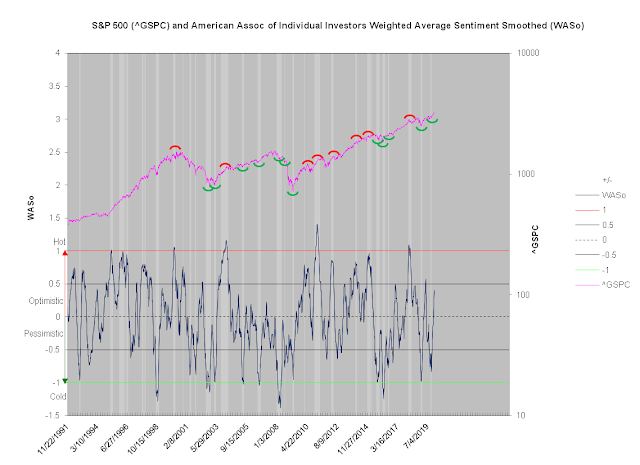 Posted by Eric De Groot at 7:00 AM
Email ThisBlogThis!Share to TwitterShare to FacebookShare to Pinterest
Labels: Sentiment Review