The bears have been citing extreme greed (lack of fear) towards US stocks for months. They've been pounded by an aggressive rally to all-time highs over this period, so skepticism is warranted.

Extreme greed readings are easy to find and heavily cited today. Don't confuse frequent citation with efficacy. For example, the put call ratio is being called extreme by some. Hard to argue with the presentation. A concentrated but not necessarily extreme reading exists. Are theses readings reliable? Lots of good signals, but also many bad ones in which investors following them would have missed a strong rally. Long term review of put call ratio adds additional uncertainty as the lower bound of the ratio drops dramatically from today's trading range. Does the disciplined trader ignore data prior to 2008?

Few days ever reached this level.

In 7 out of 8 cases, Stocks topped immediately or had already peaked. 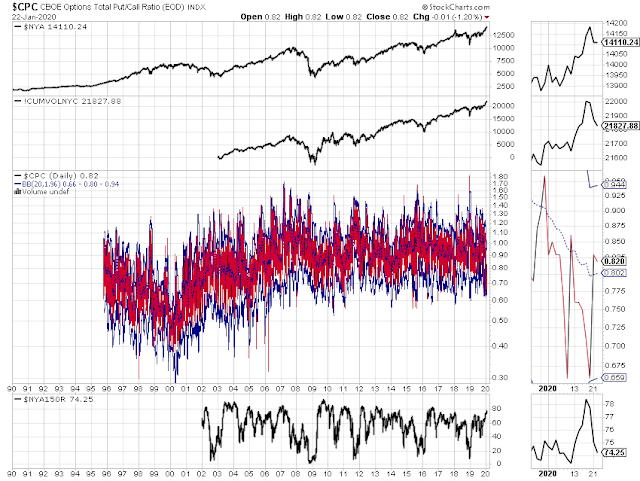 Posted by Eric De Groot at 7:28 AM
Email ThisBlogThis!Share to TwitterShare to FacebookShare to Pinterest
Labels: Sentiment Review