Many stock experts are convinced that 10%+ correction from extreme sentiment is coming. The 600+ point decline on Friday likely marginalizes any challenge to this outcome.

US stocks have been rallying for months.  The rally slowly transitioned sentiment from pessimism WASo < 0 to optimism WASo > 0. The bears have been calling current sentiment extreme. The computer, however, cannot confirm it. Weight Average Sentiment (WAS) and Weighted Average Sentiment Smoothed (WASo) are the main measure of sentiment in the Matrix. The following charts are updated weekly for subscribers. WAS > 1.96 and WASo > 1 are extreme. WASo > 0.5 crosses the threshold of neutral sentiment. 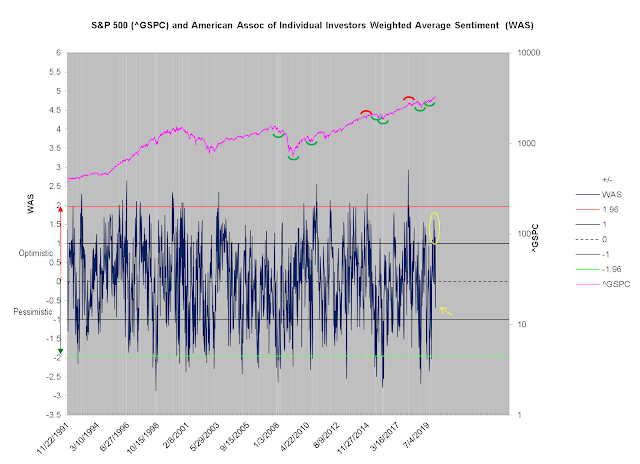 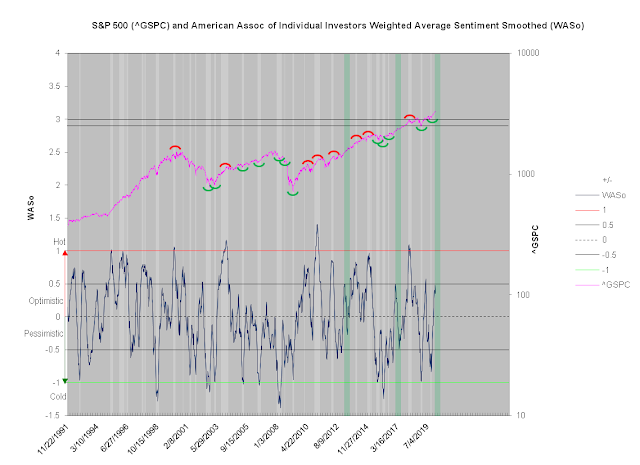 The point of this discussion is not "everyone is stupid but us" but rather to challenge the prevailing logic that extreme sentiment makes a correction inevitable. Stocks could be vulnerable for other reasons, but extreme sentiment is not one of them.

The Weighted Average Sentiment Smoothed (WASo) reached 0.48 before Friday's big decline.  The most notable examples of similar highs after cyclical economic bottom were 2012 and 2016. All three periods have been highlighted green (see Weight Average Sentiment chart).

The next observation is simple. Sentiment turned pessimistic after WASo ~ 0.5, but price did not correct as expected. Perhaps it's different this time. Coronavirus, or Ralph Acampora, the Godfather of TA, calls for 10% correction has changed the game. What if today's setup is not different than 2012 or 2016; 2016 was an election year.

Posted by Eric De Groot at 11:59 AM
Email ThisBlogThis!Share to TwitterShare to FacebookShare to Pinterest
Labels: Sentiment Review