The #FederalReserve needs #inflation in order for these money printing programs to function properly. This explains why food and ag prices are probably headed much higher over the course of the next 5 to 7 years. Become a #farmer.

The Fed "needs" inflation, so to speak, but they, despite all the credit given by the Internet, cannot control it. The public's assumption that the printing press, we see it by the reference of Brrrr… on the Internet, automatically translates into higher inflation is FALSE. Greenspan, Bernanke, Yellen have the monetary pedal pinned to the floor since 1995 through various forms of liquidity, QE, and various support programs to "save the day" from a never ending series of financial crises. The money supply from M1 to M3 (now discontinued) have skyrocketed, yet inflation has been nowhere in sight for decades.

The reason for the Fed's failure is confidence. As long as world's confidence in the existing financial system, possibility for no other reason than there's nowhere else to go, the velocity of money, or turnover of all the money created during endless series of financial panics/crises continues to drop. The velocity of money is currently below Depressionary levels, which suggests deflationary, not inflationary forces.

What ends this dog and pony show? Confidence lost that the current financial system can survive. If world no longer believes the core economy can be sustained, the bond market break, not just with higher rate, but a complete lack of interest in supporting it. This expectation causes inflation in the periphery economies first as the leading blast of confidence lost reverberates throughout the global economy. 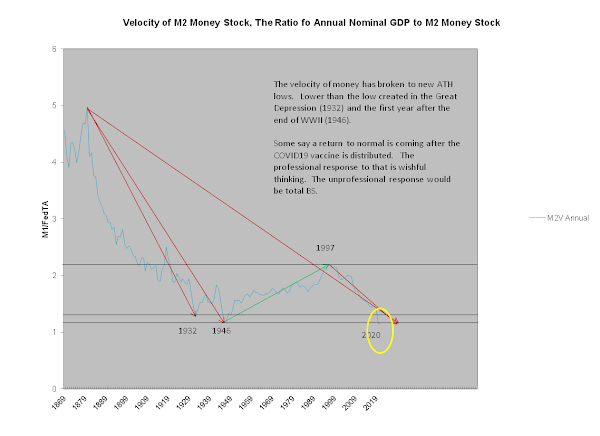 Posted by Eric De Groot at 11:19 AM
Email ThisBlogThis!Share to TwitterShare to FacebookShare to Pinterest
Labels: Confidence, Economy, Inflation, Money