Confidence is the long-standing "wild card" not only for social but also economic stability within society. It's the reason why people live in cities, pay their taxes, spend, take risks, and fly their American flags over their homes and businesses. Confidence is difficult to measure, can change rather suddenly, and moves in a nonlinear fashion that's difficult to predict and recognize.

MSM has a lot of people convinced that confidence is strong and everything will quickly return to normal. As they say in Missouri, SHOW ME! If “everything is awesome” the longest bullish phase of confidence will be followed by one of the shortest bear phases on record. While this explanation sounds good to politicians and true believers, it's unlikely to be confirmed by reality of mathematics and cycles.

The longest bull phase on recorded ended on April 2020. Trillions of dollars of debt later has aborted, or slowed the waterfall (parabolic) decline of confidence in 2020, but for how long? CE LTCO, the computer’s directional measure of confidence, is still below 0; this defines a bear phase. Even if it climbs above 0%, it will most likely be a temporary push that will require massive debt-fueled stimulus to maintain.

Subscribers looking for the truth, not narratives, should be watching CE LTCO in the Matrix (line 103 Trends Tab of the Matrix). The hyperlinks provide access to the charts below. These charts are continuously updated by the computer.

It's also important to note that the red box (bear phase) might not be continuous. It could be broken into fragment cycles that still represent a larger bear phase that will be defined in years rather than months. The longest bullish phase of confidence on record will be followed by one the longest bear phases. That’s how proportional cycles work.

Subscribers will be regularly updated not only in terms of the confidence cycle but also the assets impacted by confidence breaks. Gold, silver, the dollar, commodities, financial assets, etc are dependent on confidence. The invisible hand knows it and will be flipping trends up and down without explanations for onlookers. Do not expect the bear phase of confidence to be easy. 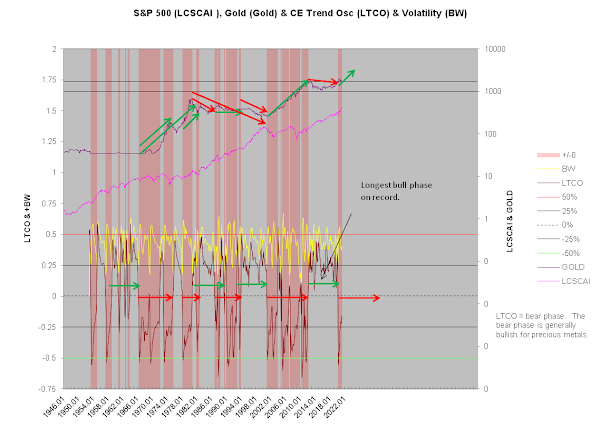