Wheat's overall trend, revealed by trends of price, leverage, and time, are defined and discussed in The Matrix for subscribers.

Thanks for the video on wheat today, great comments about the reset and comparing the DI to the last time wheat broke out in Sep ’20.

A few bits/pieces from the fundamental side if you’re interested,

We have a pretty severe drought in North Dakota. It’s early, and farmers are just starting to plant their spring wheat. But it’s historically dry up there & we’re expecting lower spring wheat acres vs corn/beans due to the rally in corn/bean prices (more profitable to plant corn).

US wheat prices dropped quite a bit in March. China started buying US wheat this past week which is a big deal.

Yesterday in USDA’s monthly Supply/Demand report, he took China’s wheat feeding up 5 mln tons, to 40 mln on the year vs only 20 mln this time last year. US wheat is at a significant discount to domestic Chinese corn prices.

Wheat is also held in a strategic reserve in China. The trade believes China may begin restocking it w/ world wheat supply.

Black Swan: if conflict breaks out btwn Russia/UKR. Haven’t figured out if Putin is doing this “for show” after Biden called him a “killer” or this is a strategic play to test the US.

Black Sea wheat is the cheapest in the world. If that was put on pause, you would see a pretty significant move in the board.

The comments above are professional and worth a read. As I have said before, numerous professional traders, brokers, farmers, ranchers, and producers read and follow the Matrix. They provide excellent perspective to the computer-driven output. Thank you.

The invisible hand just kicked us in the shins and said, “Hey dummy, a look at wheat.” It calls me dummy all the time, because I've learned that I cannot see these events without the computer. It’s as simple as that, so please watch the video to understand a conversation that few hedge fund managers, Wall Street whizzes, or other slick talkers will join.

We're sold everything is random early on. Maybe God pulls the strings with everything we do, but I have learned that a lot of order exists within the perceived randomness of life. The Evolution of the Trade is a construct based on observation, mathematics, persistence, and hard work. Big returns, whether they’re achieved in Bitcoin, wheat, or gold, won't happen without following the EOT’s four phases. Here's the good part, the EOT can be taught to ANYONE.

I can only show you the door, you must walk through it. The price of understanding is a subscription key.

One last comment, wheat failed in 2017, because the invisible hand knew it was going to rain. The red circles below highlight growing bearish bearish builds in July 2017 and August 2018. The computer was saying, "Hey dummy, if the primary trend weakens and flips after either period, get the heck out!" 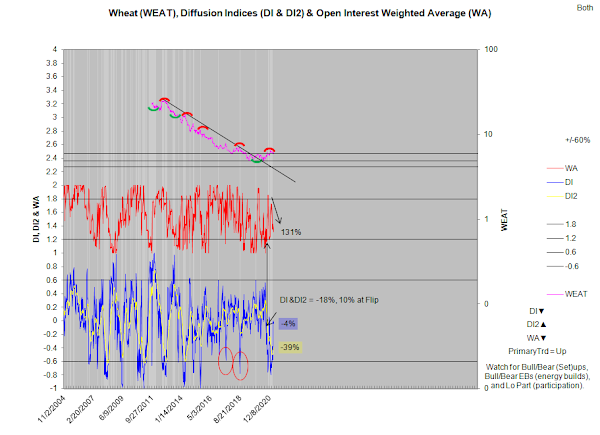 The Evolution of the Trade and Matrix

Posted by Eric De Groot at 11:18 AM
Email ThisBlogThis!Share to TwitterShare to FacebookShare to Pinterest
Labels: Wheat Review