Lots of emotions on the corn….

I think you and I are above the “frey”, but a lot of unhappy farmers, analysts, et al.

I’ve got farmers starting to freak out now too..

I have no doubt. Corn went from waiting for $11 on this impulse, a completely unrealistic goal for the daily impulse, to sell at any price within a few weeks. This emotional cycle is been observed in Bitcoin, silver, gold, bonds, stocks, biotechnology, and so on for years. It's corn's turn.

One of the safest plays in the Matrix has been coffee, yet everyone is talking about corn after 5 sigma daily impulse? Where's the trading discipline? Didn't think the interpretation of "there's no play here", repeated numerous times in various reviews meant keep buying as long as everyone else was.

Keep watching DI. Doesn't matter what the Internet says. It's generally wrong, short-sighted, angry, and completely void of investment discipline. Doesn't matter if the Matrix was offered for free. Few would follow it. I'm only concerned about teaching those that do. So, I repeat, watch DI. If DI keeps rising, the invisible hand is accumulating. That matters more than every fancy chart posted for free on Twitter. 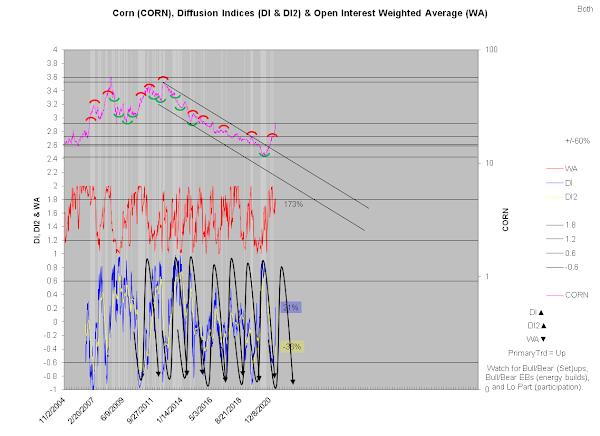