Evolution of the Trade (EOT) see corn as primary trend up for 7 months. The 50% profit has dwindled, but a drawdown, one only described as violent and painful, was inevitable as the last daily up impulse's price cycle reached nearly 5-sigma. Anyone not familiar with normal distribution cycles - 5 sigma or 5 standard deviations is exceptionally rare. GE had a quality program known as 6-sigma, essentially aiming toward zero defects.

I said it was going to get volatile in the grain markets. It has. I also said numerous times there was "no play" into May's rally in terms of the EOT other than profit-taking. Some do it when BuS > 1, others 2, and others see 3, 4 as mandatory profit points. BuS reached 4.9 on 05/07. Could BuS have climbed higher? Yes, it's done so several times since 1959, but this fact would never have altered the "no play" assessment. The last chasing (long) opportunity was the 4/1 RESET. $CORN, the ETN proxy for corn, traded at 17.37 at the last RESET.

Energy is the key. I've said this so many times, regular readers might be ready to barf after reading that. DI, a composite measure of energy in the futures and options markets, was rising before corn collapsed. DI and DI2 had climbed to -11% and -31%, respectively. While this combination is not impressive, it represents a big jump from the previous week of -26% and -33%. This jump happened as $CORN ticked higher last week. That's impressive.

What will DI post this week into the decline? We'll see. If it's accumulation DI and DI2 will climb higher. The higher they go, the more energy available to reorganize the composite trend towards a viable RESET.

Stay tuned. The energy portion of the Matrix will be updated on Friday before 3 pm EST in the US for subscribers. 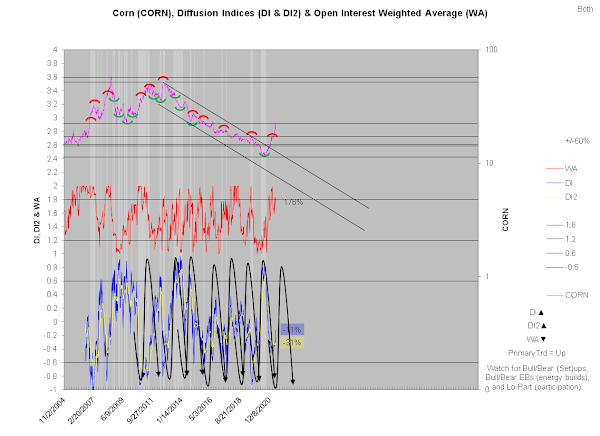 Posted by Eric De Groot at 8:03 AM
Email ThisBlogThis!Share to TwitterShare to FacebookShare to Pinterest
Labels: Corn Review