Wheat's overall trend, revealed by trends of price, leverage, and time, are defined and discussed in The Matrix for subscribers.

Wheat is also moving through the Evolution of the Trade. Its energy build is less appealing that corn and soybeans. While soybeans have the best energy build in the grain market, they have yet to generate a bullish energy build.

Wheat's primary trend is up, but its composite trend as defined by the daily, weekly, and monthly impulses, has fallen out of upside alignment. Wheat like corn and beans has entered cause building. This will likely continue longer than expected because the bearish energy build probably needs weeks/months to unwind.

Wheat's primary trend is up, but it's generated only 14 profit over the past nine months. 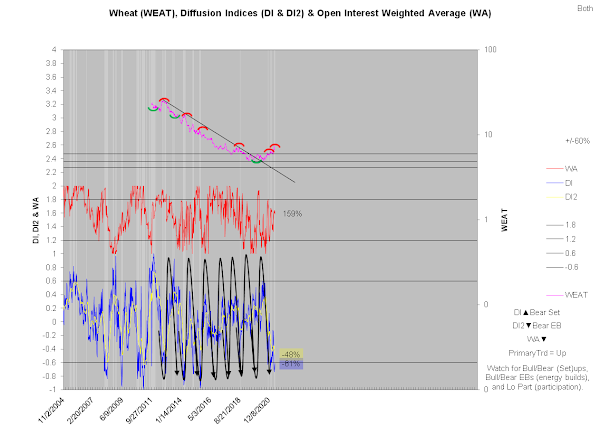 Posted by Eric De Groot at 8:35 AM
Email ThisBlogThis!Share to TwitterShare to FacebookShare to Pinterest
Labels: Wheat Review