Those that view the message of the market on a daily basis are likely confused by trading noise. While trading noise contributes to long-term trends, it does not define them. The focus on short-term noise rather than trends, a source of confusion for the majority of investors, leads to the creation of bagholders at major trend transitions.

Cocoa's overall trend, revealed by trends of price, leverage, and time, are defined in the The Matrix for subscribers.

RGC Commodities LLC mentioned that I wasn't a "fundamentals" guy. Study of the fundamentals is engrained in the commodity markets and traders. I'd like to clarify it by saying, I'm not a "headlines fundamentals" guy. I follow the fundamentals as the invisible hand understands, sees, and anticipates them. I know some consider that a horseshit response, but experience has taught me to follow the old French saying Suivez l’argent! (follow the money!). We following it through DI & DI2 (energy).

Cocoa's primary trend has been DOWN, "F" in the phase column and highlighted green in the Matrix, since the 06/01/21. I have no intention of chasing it because we follow the invisible hand. The invisible hand is accumulating into the decline; DI is rising fast as prices decline. DI and DI2 are 54% and -21% (see Cocoa's DI). The computer doesn't recognize the bullish energy as significant yet, but it will if the uptrend continues. 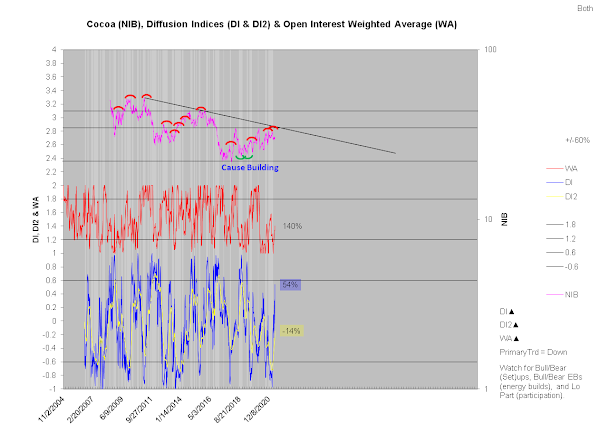 It doesn't matter whether we're talking cocoa, coffee, gold, or any other market in the Matrix. The odds of failure rise dramatically if the primary trend is flipping against an opposing energy build. With that said, if Cocoa generates a powerful bullish energy build against a primary downtrend, it could be a precursor of success upside flip.

We are watching closely. I may NIBBLE in anticipation of a primary uptrend flip IF DI continues upward. The higher and longer DI and DI2 climb, the more likely the next primary trend flip and triple alignment will be successful.

Everyone should be watching cocoa!