The corn and soybean markets are digesting the fast pace of planting the crop and the relative good start in the major “I” producing states (Iowa, Illinois, Indiana)….this is likely contributing to the reset. The fundamentals remain extraordinarily tight for the old crop and new crop balance sheets as demand remains very strong. Any production hiccup and the situation becomes explosive. Keep an eye on the Dakota’s as they are experiencing an early season flash drought, if this were to extend or expand into Minnesota and Iowa we have the potential to make new all-time highs in corn and beans.

Can't say the invisible hand disagrees. The minor consolidation in corn, the setup that seemed to get every bull worried over a span of two weeks, sparked a significant response in Corn's energy profile. Accumulation is normally seen when price declines and DI rises. $CORN, an ETN that tracks the second and third month contracts, fell from 22.79 to 20.75 since 5/7. DI, a measure of participation, distribution, and relative money flows within futures and options markets, rose from -47% to 45%. This suggests massive accumulation from the invisible hand. 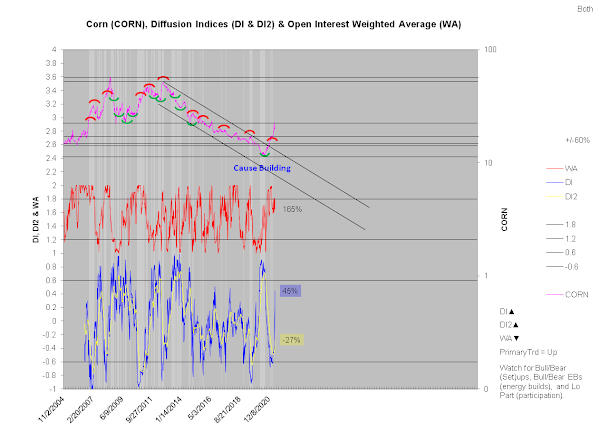 Evolution of the Trade (EOT) defines four different phases within an asset's life cycle. Nibble, Flip (up or down), Alignment of Trends & Energy (Reset), and primary trend decline. Corn is still within the phase 3. It's not old, so primary trend decline (phase 4), if the trend holds, is months/years off.

The core position is long. The core position can be escalated after Resets, but it's not always wise to chase every one. Corn's last reset a few days ago is already MID cycle because the secondary trend is so extended.

If you trade, produce, or use corn, please join the ongoing conversation provided by the EOT. The conversation is updated daily in the Matrix for subscribers, and will be discussed in Review due to the importance and concerns of food inflation. The public has no clue to what could be coming at the grocery store.

Posted by Eric De Groot at 7:49 AM
Email ThisBlogThis!Share to TwitterShare to FacebookShare to Pinterest
Labels: Corn Review