The Matrix, an array that displays alignment of price & volume (trends) within the cycle of TIME, intermarket money flows, and the flow of sentiment, helps subscribers recognize the Evolution of the Trade for 44 markets. Markets include #stocks, #bonds, #forex, #Bitcoin & #Commodities.

The #GoldStandard was an incredibly useful tool at maintaining price stability. Commodity prices remained stable for 27 years when the US was on the gold standard. Food #inflation exploded when Nixon closed the gold window in 1971. Money printing causes inflation. pic.twitter.com/OPzIMLE77R

Comment similar to those above illustrate why the gold bugs are so committed to their positions and narrative. Gold bugs believe gold and silver provided rock-solid financial discipline, but it's only an illusion. Debt bubbles always form regardless of the level of financial discipline. It's always the 'inflexibility' of gold & silver that worsen every crisis when confidence faltered in the institutions (i.e. government) that create and support the debt.

Gold and silver cannot expand when demand for cash spikes during a monetary crisis. Central bankers realized this human behavior that hard way during the 30's Depression. Demand for money was so great during the Great Depression that local communities offered their own script (tokens) that allowed local economies to function. Local depression script can be purchased on eBay today. Scripts materialized because the Fed and Treasury could not expand the money supply during a crisis due to the "inflexibility" of gold and silver anchoring the monetary system.

It wasn't until Roosevelt listened to a fringe economist that suggested that money needed to be "flexible" to respond to the crisis. The money supply needed to expand as millions hoarded money outside the banking system. A partial compromise was reached, and gold was confiscated and devalued from $20 to $35 an ounce to expand the money supply. The US dollar didn't reach total flexibility until the 70's when the gold window was closed.

Let's be clear, irresponsibility of debt creation places sovereign nations and city-states in trouble. Gold and silver represented an attempt to force monetary discipline, but this 'discipline' meant nothing if debt creation wasn't controlled. Gold and silver never controlled debt issuance. Debt creation in the Western economic is out of control again (see Total Credit Market Debt). It wouldn't matter if gold and silver anchored the financial system, because the path of least political resistance is infinite expansion. 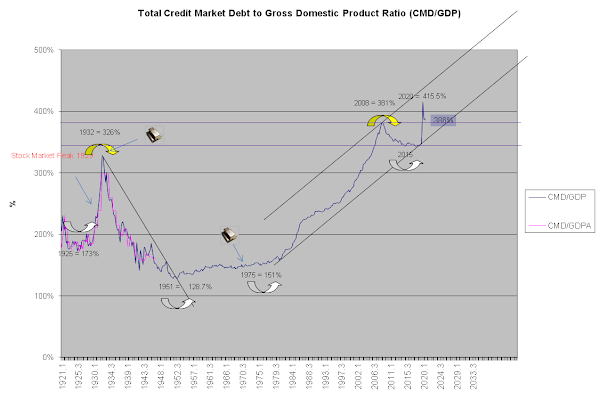 Strain is growing, but they're able to kick the can down the road because money is flexible. The system survives (for now), because confidence in the institution and create and support the debt, while deteriorating, still exists.

Subscribers, however, understanding that confidence is also flexible. The confidence oscillator is reported on line 103 in the Trends tab of the Matrix. Confidence has been in bear phase since 2020, and will likely remain there for years. Bear phases in confidence coincide with panics, crisis, and system resets. Please keep an eye on it. While the bear phase remains, the public isn't feeling it as much because it's bouncing from a downside acceleration. Another downside acceleration is coming. 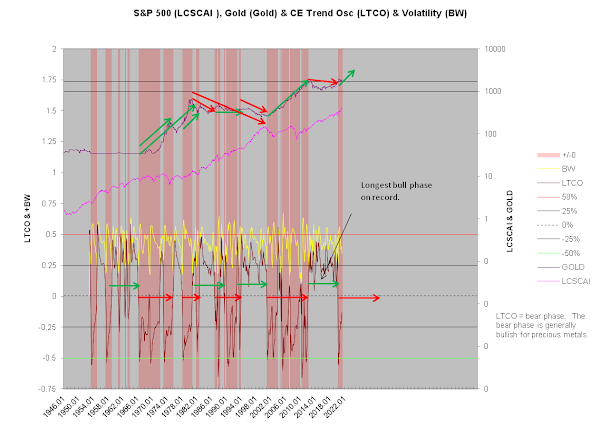 Posted by Eric De Groot at 7:39 AM
Email ThisBlogThis!Share to TwitterShare to FacebookShare to Pinterest
Labels: Matrix