The old American idiom of a day late and dollar short is a phrase easily applied to the majority's ability to time (buy or sell) US stocks. The majority, influenced more by instinctual behavioral tendency of the individual to seek acceptance of an emotionally-driven crowd than act independently in the minority, views rising and falling stocks prices as bullish and bearish. This tendency that drives them to chase when probabilities favor fading relegates the majority as the consistent bag holders of history's panics and trend changes.

Confidence is an often discussed but misunderstood concept on the Internet. The computer follows confidence in numerous forms in the Matrix. The most often referenced is the directional tool called the confidence oscillator.

The final reading of confidence from the University of Michigan solidifies the sharp downward break first reported in early August. The sharp break reinforces the bullish trend for gold and silver regardless of what the talking heads say.

Inflation is a function of confidence, not monetary conditions. The Fed can print to infinity without any effect on prices if confidence remains high. Watch inflation intensify once confidence deteriorates even further. That's the expectation as long as the confidence oscillator remains below 0 (see Confidence Oscillator below). The longest bull phase on record is likely to be followed by the longest bear phase on record (very long red box). Only the carpetbaggers of the past could spin these observations into a bearish story for gold. Point is, the odds favor a gold rally under red boxes. The invisible doesn't care what we think or believe should happen.

Subscribers should watch for deterioration of the confidence oscillator in the coming months. The further LTCO drops below zero, watch out gold bears! 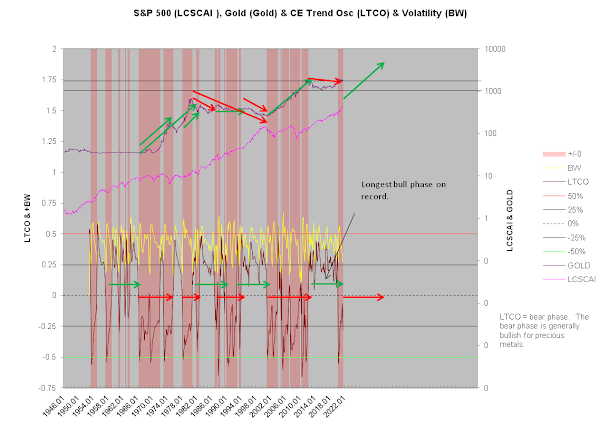