Friday's close doesn't change significantly change the conversation about Corn. A quick review of the energy, however, is needed. If energy didn't stand out, it wouldn't be mentioned.

Here's the real head scratcher, the invisible hand continues to accumulate despite the weekly time cycle extension. Corn's DI & DI2, two statistics that define energy, rose from 60% and 29% to 62% and 33%. It's not an unbelievably mind-boggling spike, but any increase under any time cycle extension is surprising. 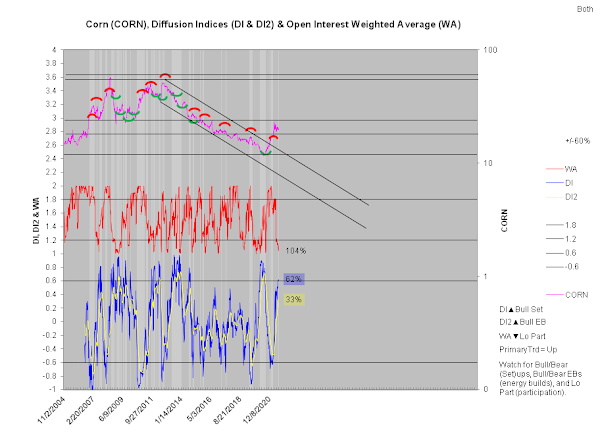 Understand what we know. The weekly impulse is old. Probably the second oldest since 1959. The invisible is accumulating. In general, the invisible hand is not crazy, emotional, and understands the market better than everyone. Can DI & DI2 go higher? Yes. We've seen DI2 readings above 60% before. Historical observations across all markets tell us that the higher DI & DI2 go, the more likely it will produce a rally when it finally dissipates (releases).

What constitutes a release? DI2 starts down ticking.

Experience tells us corn, grains, all markets are emotional; this is the nature of the beast. It's difficult to understand any market when blinded by emotion. While we adhere strictly to Evolution of the Trade, its important to understand that it would take roughly 5-10 minutes before this discussion churns up emotion, causes the bears and bulls to start waiving their flags, and triggers finger pointing and chest pounding on the Internet. Do not walk down this path.

The primary trend is still up. In terms of the EOT, it means the path of least resistance is up. The composite trend, a function of the daily, weekly, and monthly trends, is out of alignment due to the weekly cycle. Short term profits are highly dependent on an organized and Early cycle composite trend. Every subscriber learns this eventually, either by lesson or brute force. Lesson is much easier.

Please be patient. I can't tell you why the invisible hand is accumulating, but it's not enough to justify forcing a bullish position until the weekly cycle resets. Do not assume the weekly cycle will never reset. It will eventually. The majority tends to get punished when it happens.

Posted by Eric De Groot at 11:48 AM
Email ThisBlogThis!Share to TwitterShare to FacebookShare to Pinterest
Labels: Corn Review