A word of caution to anyone that "believes" they have corn figured out. This discussion applies to any market in the Matrix.

Corn's secondary trend has rallied 46% over 51 weeks.  While these statistics generate price and time cycle of 1.3 and 1.7, they're not as extended as they 'feel' or being portrayed on the Internet. The Internet, frankly, talks too much and rarely does its homework.

Corn's largest price and time statistics are 161% and 88 weeks. Both were registered in the weekly impulse from 7/30/1972 to 3/31/1974. Those describing today's impulse as "it's over" might be similar to selling in the spring/summer of 1973, thus, missing the highly profitable continuation until the spring of 1974.

A graphical representation of weekly impulses since 1959 will help frame today's rally. The large colored boxes highlight 4 out of the 6 weekly impulses that were bigger than today's.  Let's call them the "big ones." The big ones have been overlaid the current impulse. The comparison helps us visual two critical observations: (1) today's impulse is not as wide and tall when compared to the big ones, (2) and the less obvious but equally important, the nearly all the big ones often did not reset.  They're one long continuous green box.  In other words, we could be waiting for reset of weekly price and time cycles that will never come. 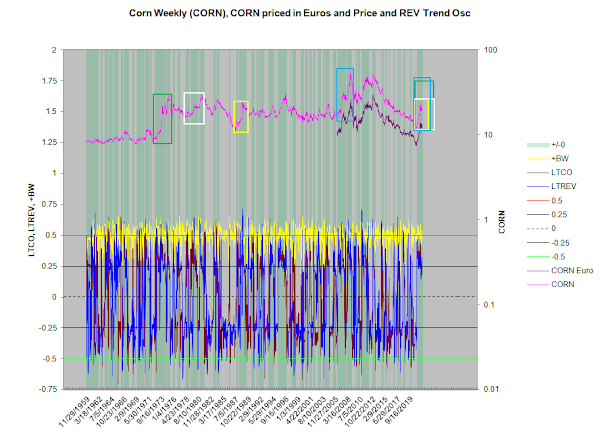 Many have described the recent round of cause building (consolidation) as it's over! The invisible hand's interpretation is far less decisive. The correct interpretation, a description that's beginning to repeat in messages, is this setup is hard. It's hard within the Evolution of the Trade, because weekly impulse cycles, if describing a big one (move), is more likely to continue than reset.

Energy has every subscriber following corn and soybeans scratching their heads. Why energy remains so high as this all unfolds is unclear. What is the invisible hand trying to tell us? One thing is certain, if the energy build holds or continues to grow as the composite trend realigns to Triple Up, the odds favor the bulls. I could be more descriptive than that, but I do not want to diminish the importance of this message. Please download the Matrix and confirm these numbers and energy builds. It's ok to scratch your head.

Posted by Eric De Groot at 11:30 AM
Email ThisBlogThis!Share to TwitterShare to FacebookShare to Pinterest
Labels: Corn Review