Suddenly everyone thinks the stock market is going to plunge says a growing number of headlines this weekend. Headlines have been and will always be entertainment only.

If everyone thinks the stock market is going to plunge, then the majority would be pessimistic. It's important to understand concepts such as the majority and minority. Weighted Average Sentiment readings, lines 51 and 52 in the Trends Tab of the Matrix, defines what the majority is thinking, not what we believe they're thinking. WASo, the slow reading of sentiment concentration, is 0.42 (see Weighted Average Sentiment WASo). Extreme optimism is defined by readings greater than 1. 0.42 suggests that the majority is optimistic. An optimistic majority is NOT the backdrop in which everyone thinks the market is going to plunge. If they thought a correction or plunge was coming, they'd be bearish, which ironically, would make a crash less likely. Plunges happen when everyone is bullish and complacent - like today. Point being, headlines generate discussions that make no sense. It's part of the clueless misdirection game that keeps the public chasing its tail while clicking headlines that confuse.

If you're worried about a correction, ignore the headlines, and follow the invisible hand. We do that by watching the Matrix and learning to Time A Correction (or Worse). The invisible hand when sending warnings of varying degrees ahead of corrections and crashes. Learn to read them, and you'll soon understand headlines are for entertainment only. 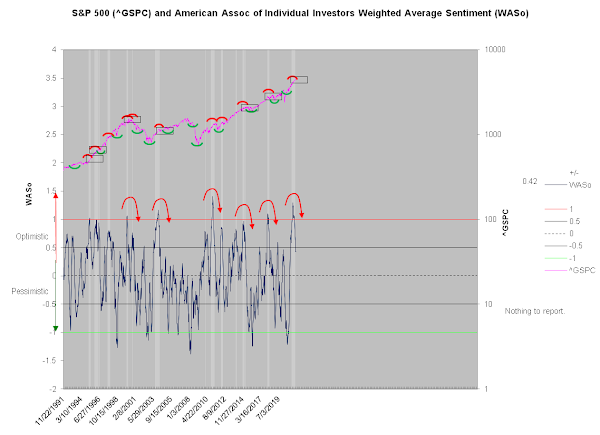 Posted by Eric De Groot at 7:19 AM
Email ThisBlogThis!Share to TwitterShare to FacebookShare to Pinterest
Labels: US Stocks Review