Grain's overall trend, revealed by trends of price, leverage, and time, are defined and discussed in The Matrix for subscribers.

USDA released its grain report. I'll make no attempt to interpret it. Others are more qualified to do that.

Credibility reaches a new low level for @USDA as it reports discovery of 81 million bushes of Soybeans $ZS_F it did not know existed. Wonder how many USDA officials and/or their relatives were secretly short. https://t.co/8JN7WBegBW

I find it a bit suspicious that any organization can suddenly find 81 million bushels of anything. Perhaps, but it certainly doesn't smell right. Smells a lot like the Bureau of Labor and Statistics (BLS) when they unexpected 'find' 50,000 were created within a month, then completely wipe them out (revise them lower) six months later when nobody is looking. This I can prove without a problem. Government data sources are neither timely nor reliable unless used as contrarian indicators.

Ok, Eric, tell me something I don't know. Agreed. What I view as important, what most traders cannot see, is volume. Richard Wyckoff viewed volume (Force) as or more important than price. The computer tracks it and reports it in the Matrix, but not in detail. The first suggestion that something is not right, is the Daily (Tertiary) Trend columns under divergences (DIV). The daily trend is down, but the DIV column says BULL. Volume is not confirming the decline. The DIV could be extended to the weekly trend. This will produce an even stronger divergence. Contact me directly for a more detail conversation. 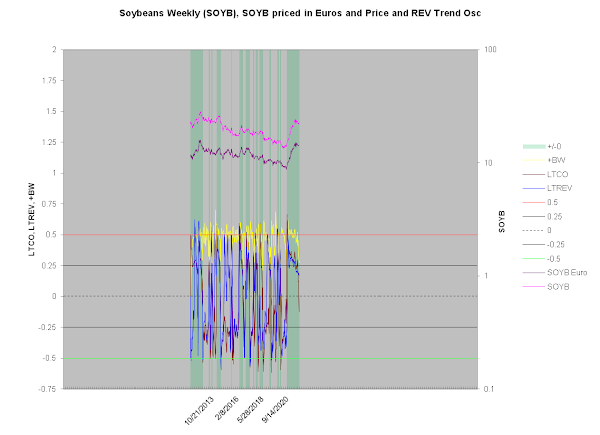 Posted by Eric De Groot at 7:55 AM
Email ThisBlogThis!Share to TwitterShare to FacebookShare to Pinterest
Labels: Grains Review