Today's investment, political, and social backdrop is similar to the Planet of the Apes (1968). I watched re-runs of this movie as a kid, not understanding its message, but it's easier to see now, especially with the Matrix.

US Sen. Manchin: Negotiations Ongoing, Still In Talks With The White House

Dr. Zauis was the Minister of Science and also Chief Defender of the Faith. The two positions often in direct contradiction. We see this in politics today. Don't put too much faith in Senator Manchin, or others appearing to oppose massive spending and expansion of government. Managing expectation from $3.5 to $1.9 trillion will likely be spun as fiscal discipline, but remember the US total credit creation (relative to national income) didn't reach 380%+ through spending discipline (austerity and restraint) by any party. The path of least resistance is borrow-and-spend until the free markets won't allow it. It's difficult to talk about scientific truth when you're also the Chief Defender of the Faith. Can't watch TV without recognizing both in today's messaging.

I'd suggest the public wake up, but most want to believe the Faith has not been corrupted.

Total Credit Creation As A % of GDP 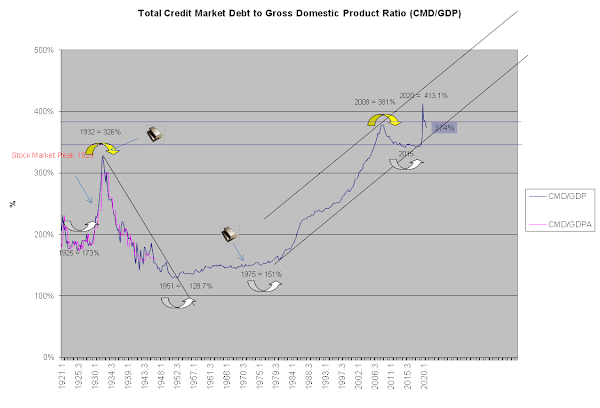 Posted by Eric De Groot at 9:24 AM
Email ThisBlogThis!Share to TwitterShare to FacebookShare to Pinterest
Labels: Budget Crisis, Debt, Politics