Soybeans' overall trend, revealed by trends of price, leverage, and time, are defined and discussed in The Matrix for subscribers.

I have spent nearly 25 years studying markets, trends, and cycles, and programming computers to do it. I have learned that everyone is a short-term trend follower until it (the ST Trend) betrays them. The real skill lies in knowing when the window of opportunity for betrayal opens. Many within the majority believe this skill lies in the ability to read the fundamentals, but frankly, they're too slow. Markets move with blinding speed, and are discounting future events while the majority grapples with irrelevant past explanations.

Earlier this morning, I wrote that beans current setup should be treated with caution despite a Double Up setup. The short term trend, driven by human emotions, is powerful. The bulls are bears have entered the streets for control. It reminds me of the old NES video game - Double Dragon II we played in college. Billy needs to save his girlfriend.  This is done by going Cobra Kai on anything that moves. Today's traders are a lot like Billy. They're quick to helicopter arms mode without first studying what the invisible hand.

So what is the problem? Short term trends most often "betray" when confusion reigns. My Matrix, a more complicated setup, shows too much complacency in beans.  Spreading activity is 100%.  That's extremely low.  Spreading activity tends to spike when Large Specs are confused.  Confusion is the backdrop for betrayal.

This is the type of stuff that gets addressed in Soybeans Report. Keep it simple stupid? Some believe that. You'll find they chase their tails a lot. Reading the invisible hand is not easy. The K.I.S.S. method misses a lot. 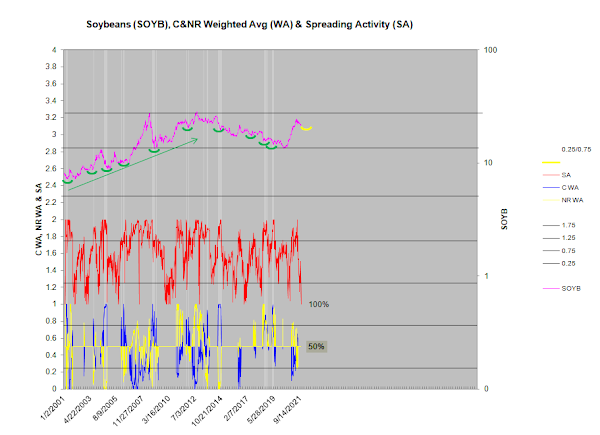