The global economy and stocks began behaving strangely in late summer of 2019. Repo rates spiked unexpectedly. Few acknowledged it. Anyone looking for a return to “normal” market by fundamentals will likely be disappointed in the coming years.

Stocks crashed in early 2020. Relative performance within the stock market suggests a reallocation of resources away from old to new economic plays. The old norm of “Made in USA” is not coming back. Manufacturing, design, and information collection will be borderless. Citizens will struggle to maintain their liberties and rights without oversight and intervention under this economic backdrop.

Rising stocks as the global economy declines is a real possibility. Investors blame the Fed for the stock market's distortion of reality. The Fed, contrary to popular opinion, is not that powerful. It cannot control the world's capital flows. The invisible hand, the true driver of market and trends, is redefining the world as the core economy passes from North American to Asia.

COT Report data for the stock market used to work really well when all we had was the big SP500 contract. All the participants crowded into that arena, and gave good indications. But the proliferation of so many other index permutations several years ago made it unreliable. https://t.co/jbATn3o6P5

I know most of the egos on Twitter won't like the comment that the COT data works. The value of the data, as subscribers know, is how it's manipulated and presented. The S&P 500's bearish energy builds in 2021 were early. That happens. DI & DI2, currently -51% and -27%, continue to fall as prices decline.  Oh shit. 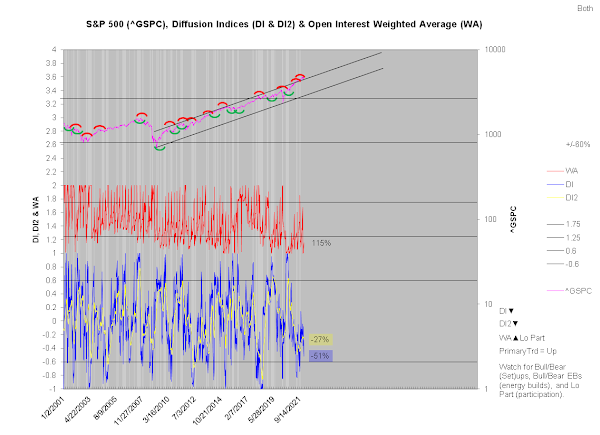 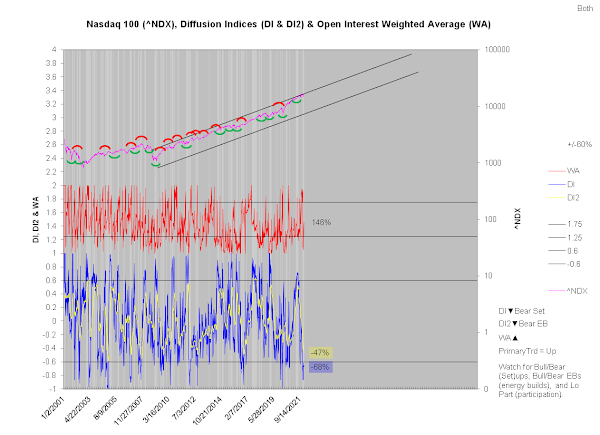 Subscribers should (better) understand the bearish risks unfolding. Please don't act surprised. The Timing A Correction/Crash Section reached 70% a week ago. We talked about. Please watch the Matrix Update Reviews.  Concentrated bearish energy builds have been popping up in the S&P 500, Nasdaq 100, and Russell 2000 for weeks.

The composite Equity DIs are -32% and -20%. -40% represents the cutoff for bearish concentration. These numbers fell as prices decline! The title of the last Russell 2000 Review was Oh Shit. What else can we do?

Posted by Eric De Groot at 4:57 PM
Email ThisBlogThis!Share to TwitterShare to FacebookShare to Pinterest
Labels: US Stocks Review