CYCLE OF ACCUMULATION AND DISTRIBUTION

Investors should use mark ups and downs once price jumps the creek and breaks the ice from accumulation and distribution phases, respectively. Low volume dips and rips that run contrary trend are used as entry points. Investors slowly withdraw from the trend for the safety of the sidelines (sitting on the fence) once a selling or buying climax is identified.

Volume may be more important than price when interpreting price action within the cycle of accumulation and distribution. When price breaks the ice of support or jumps the creek of resistance, it must be statistically significant. A test - fill and close above support on 5% or more contraction of volume, for example, suggests waning downside force and generates a bullish setup. The bigger the percentage, the more decisive the contraction. An insignificant contraction of volume increase the probability that support will be tested or broken in the near future.

Chart: Cycle of Accumulation and Distribution: 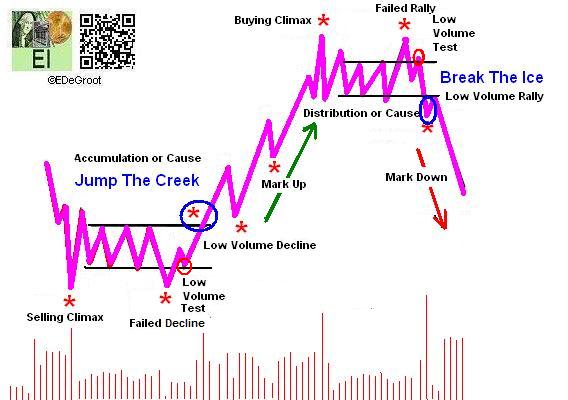 Sign of strength (SOS) or sign of weakness (SOW), largely ignored by masses, define daily technical patterns that jump the creek of resistance, break the ice of support, and/or low volume divergences. Experienced traders recognize SOS and SOW as drivers of unexpected outcomes. For example, SOS within consolidation often foreshadow unexpected strength when cause transitions to mark up. SOW within consolidation often lead unexpected weakness when cause transitions to mark down. SOS and SOW observations, when combined with trend, leverage, and time analysis, help anticipate change.

SOS and SOW are also applied to cycles. Cycle inversions, the observation of weakness or strength during a bull or bear cycle, can be SOS or SOW. For example, continuation of a decline during a bull phase for stocks, is a cycle inversion and SOW. This cycle inversion, an indication of strong distribution, increases the probability of a stronger than expected decline when the phase transitions to bear. 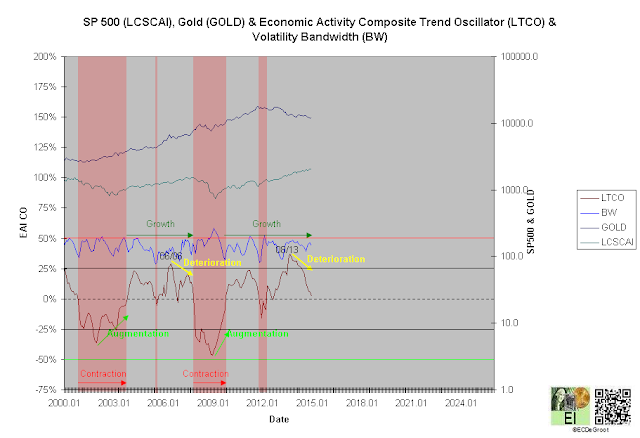 CloseOsc(E) is a multi-period momentum indicator that establish direction, magnitude (size), time, and amplitude (volatility). For example, an CloseOsc(E) reading above 0 suggests positive momentum. The higher or lower the the reading, the greater the momentum push. Momentum pushes expand volatility which pushes the upper and lower bands apart. When volatility contracts, i.e. squeezes price like a tube of toothpaste through the bands, it suggests increased volatility ahead.

The trend oscillators of COT analysis use the same construct as CloseOsc(E).

REV(E) represents the kinetic and potential energy of the trend not captured entirely by price.

STD NORM(E) standardizes price within a normal distribution of n observations. The probability of continuation (rally or decline) decreases exponentially as the standardized observation, called a Z Score, increases beyond 1.96.

Faders trade against the direction of the trend and sentiment of the majority. A fader using fading tactics such as selling bullish crossovers or buying bearish crossovers. These tactics are known as "fading".

In US financial slang, a bag holder is any owner (usually share holder) left holding a bag full of worthless material. In the investment world this bag is filled with worthless stocks, bonds, or other claims to productive capacity. The bag holder, convinced by ego or pride, often refuses to dispose of them despite growing evidence that they could become worthless or unsellable.

The majority and minority refers to the population of investors supporting a trend. The majority fuels market at tops and bottoms because they are consistently wrong about direction. Flash crashes, the subject of trading desk conspiracies - high frequency trading and paper price suppression in futures markets, are byproducts of human behavior. Flash crashes can materialize out of nowhere when the vast majority of investors, for example, are extremely optimistic towards US stocks (extreme greed) attempt to sell under what is usually emotional distress (see cycle). The intentions of majority (sell stocks - supply) simply overwhelms that of the minority (buy stocks - demand).

The business cycle, a concept believed manageable or dead by countless experts, has been pushing a hesitant Fed into policy corner. The Fed either raises rates soon, or prepares itself for the inevitable finger pointing (of blame) when the invisible hand, the true driver of the business cycle and global economic policy, force them to do so under a backdrop of fear, panic, and unexpected market moves - bonds, stocks, currencies, precious metals, etc.

Also known referred to as the message of the market.

Adam Smith, An Inquiry into the Nature and Causes of the Wealth of Nations, 1776

"Every individual necessarily labours to render the annual revenue of the society as great as he can. He generally neither intends to promote the public interest, nor knows how much he is promoting it ... He intends only his own gain, and he is in this, as in many other cases, led by an invisible hand to promote an end which was no part of his intention. Nor is it always the worse for society that it was no part of his intention. By pursuing his own interest he frequently promotes that of the society more effectually than when he really intends to promote it. I have never known much good done by those who affected to trade for the public good."

A correction is a reverse movement of at least 10% in a stock, bond, commodity or index to adjust for an overvaluation. Corrections are generally temporary price declines, countertrend moves, interrupting an uptrend in the market or an asset. A correction has a shorter duration than a bear market or a recession, but it can be a precursor to either.

Not all corrections, however, are obvious. Consolidations, often delayed or difficult to recognize by as much as six months, can occur as price declines, chops sideways, or increases. The latter, the observation of strength when weakness is expected, is called running corrections. They're a sign of strength (SOS) that often setup powerful rallies once completed.