Lower Dollar Will Be Driven By Market Forces

The trading and currency deals between the BRIC nations are dollar negative over the long-term.  The flight to the quality to the cleanest shirt in the dirty laundry hamper of fiat currency has been pushing the dollar higher since 2011, but the short-term eventually yields to market forces.  The key to investment success is recognition and timing of secular trend driving by market forces. 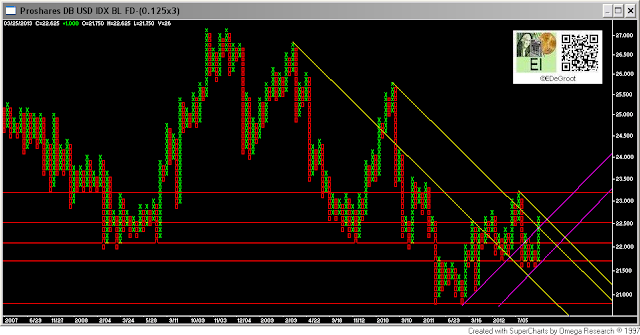 (Reuters) - BRICS members China and Brazil agreed on Tuesday a swap line allowing them to trade the equivalent of up to $30 billion per year in their own currencies, moving to take almost half of their trade exchanges out of the U.S. dollar zone.

The agreement, due to last three years and signed hours before the start of a BRICS summit in Durban, South Africa, marked a step by the two largest economies of the emerging powers group to make real changes to global trade flows long dominated by the United States and Europe.


The open forum model requires traffic to succeed. Traffic will be driven by creative and thought-provoking content designed to shed a unique perspective on the complex world investing. Effort, while easy, needs reciprocation. As soon as ad revenues, either passive or active, and/or donations stop for more than a week, effort will shift from an open forum to the privately-driven, subscription based model. Paypal, a leading provider of secure online money transfers, will handle donations. Thank you for your contribution.
Posted by Eric De Groot at 7:00 AM
Email ThisBlogThis!Share to TwitterShare to FacebookShare to Pinterest