A return to the 2019 "normal" is not coming. Western economies throughout Europe and America, those with extremely high debt burdens, have lost or are losing the ability to issue debt to generate/support economic growth. The US, for example, achieves 27 cents of growth per $1 of total credit market debt issued in 2020. 27 cents is slightly higher than the low achieved in 2009, but significantly lower 32 cents registered at the height of the economic collapse during the Great Depression. The public believes (being told) that another round debt-fueled stimulus, along with unprecedented Federal Reserve interventions, will contain the economic damage and win the battle, but the law of diminishing returns says the WAR has already been lost. Recognition of this reality eludes the public confused by a rising stock market and steady diet of optimistic economic propaganda despite growing fears of virus that's rapidly destroying small business and employment. Small businesses are the economic life blood of economic growth account for nearly half economic activity in the United States. 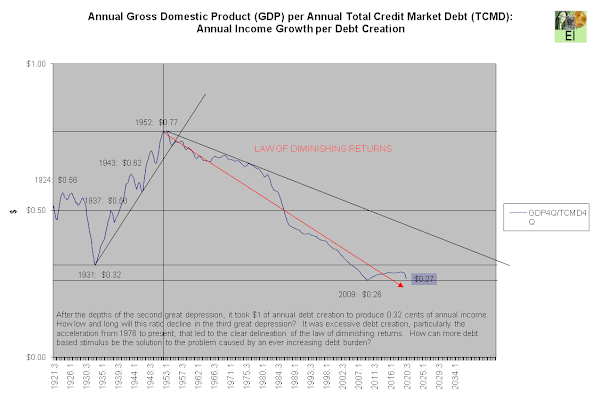 Federal Reserve chairman, Jerome Powell, recently admitted that the old economic game, the return to 2019 “normal”, is not going to happen. Speaking at a European Central Banking Forum, Powell said,

“We’re not going back to the same economy,” Powell said. “We’re recovering, but to a different economy and it will be one that is more leveraged to technology, and I worry that it’s going to make it even more difficult than it was for many workers.”

The service producing economy so highly touted as the (New Economy) by former Federal Reserve Chairman Alan Greenspan, the sector that accounts for nearly 90% of job creation in the US, will take a massive hit through the implementation of automation and technology. 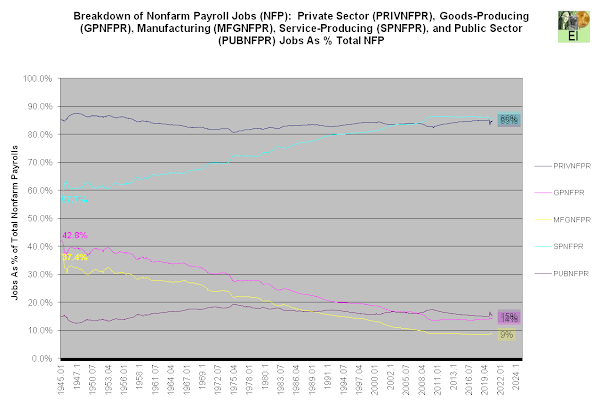 Powell couldn't call a spade a spade, but did describe the next iteration of the US's new economy as "different". Different alludes to numerous changes that the public might not like such as a massive skills gap and chronic unemployment, especially in very specific demographics within the United States.

Powell cautioned that displaced workers are going to need extended support as the U.S. economy recovers in ways that will be different from its former self.

The central bank leader said he was referring specifically to “relatively low-paid public-facing workers who are bearing this brunt,” many of whom are women and minorities.

Please download the Matrix, review and confirm the numbers from this discussion. The Free Matrix Evaluation has been recently updated for the benefit of nonsubscribers.

The computer warned subscribers that the bullish employment cycle was extended and due for a bearish cycle as far back as late 2017. The Matrix's EAC tab, AWIC (Labor) Cycle columns (M-S) started screaming at us in 2019 when BrST > 2.5. This development was discussed on the blog for years. The bullish cycle reached BrT = 112 and BrST = 2.7 on February 2020.

BrT tells us that Average weekly claims were down for 112 months. The average down cycle is 36 months, so the bullish cycle was nearly 3 standard deviations above the norm. BrST = 2.7, the highest reading on record, was an intense warning. Now that the warnings have manifested into a full blown crisis, the public believes the next round of stimulus will reverse the damage? Extreme down (bull) cycles tend to be followed by extreme up (bear) cycles. 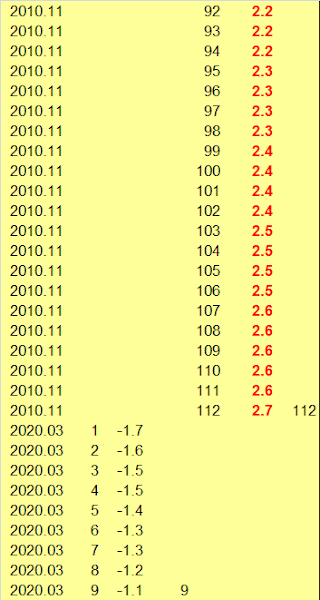 The suggestion that 4-6 week shutdown must be framed in the context of a Depression that will change the nature of the US and global economy rather than a temporary economic contraction that will restore the preCOVID19 economy.

Bear in mind, that all of this is happening as confidence remains in bear phase and continues to deteriorate. Long bull phases, periods not shaded red, tend to be followed by long bear phases, periods shaded red. Global citizens will soon understand the non-linear nature of confidence and the violence it brings to market. Conidence, rapid in deterioration once it enters a phase transition, cannot be easily restored by politicians or central bankers. Please track CE Trend Oscillator in the Trends Tab of the Matrix (Line 103-105).

Failing confidence will influence stocks, bonds, gold, silver, bitcoin and many other markets in unexpected ways. 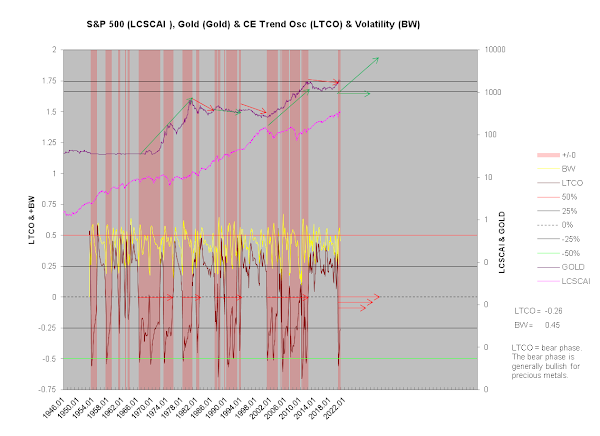 Please follow the Matrix and reviews in the coming weeks and months. Markets could be ready to do things we haven’t seen in generations.

Posted by Eric De Groot at 11:37 AM
Email ThisBlogThis!Share to TwitterShare to FacebookShare to Pinterest