The old American idiom of a day late and dollar short is a phrase easily applied to the majority's ability to time (buy or sell) US stocks. The majority, influenced more by instinctual behavioral tendency of the individual to seek acceptance of an emotionally-driven crowd than act independently in the minority, views rising and falling stocks prices as bullish and bearish. This tendency that drives them to chase when probabilities favor fading, and relegates the majority as the bag holders of history's panics and trend changes.

Seasonality for stocks can be defined by monthly risk-free returns for stocks (large and small cap). The computer also breaks it down for the 4-year election cycle. 2021 is the first year of the election cycle.

Large cap stock performance is generally bad in August (Table 1). Seasonal performance worsens when performance is taken with in the first year of the four-year cycle (Table 2)*. Seasonal weakness usually extends into September and resumes it decline into December.

Watch the S&P 500 (large cap stocks) energy build and primary trend closely in September and October. A quick review of the Matrix shows that the S&P 500's energy build is bearish and statistically significant. The bearish build creates a block dome that will either slow or flip the primary trend. The longer the bearish energy build lasts, the more influential it becomes.

Seasonal tendencies are helpful, but they do not override the primary trend. If the S&P 500 primary and composite trends flip down, bullish seasonal trends won't do much to stop the selling. 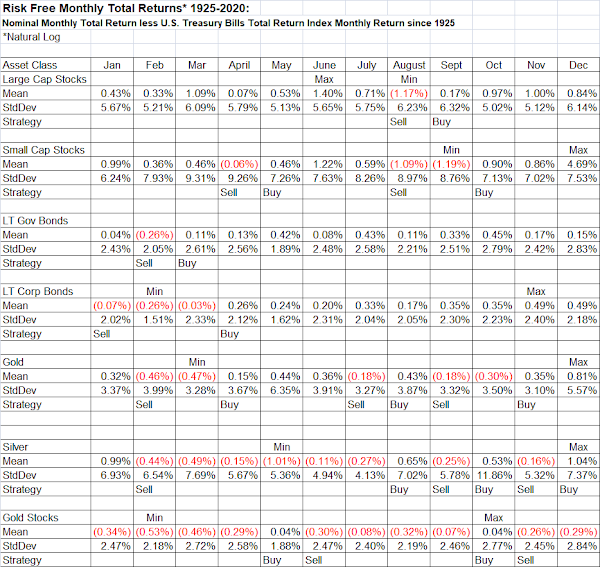 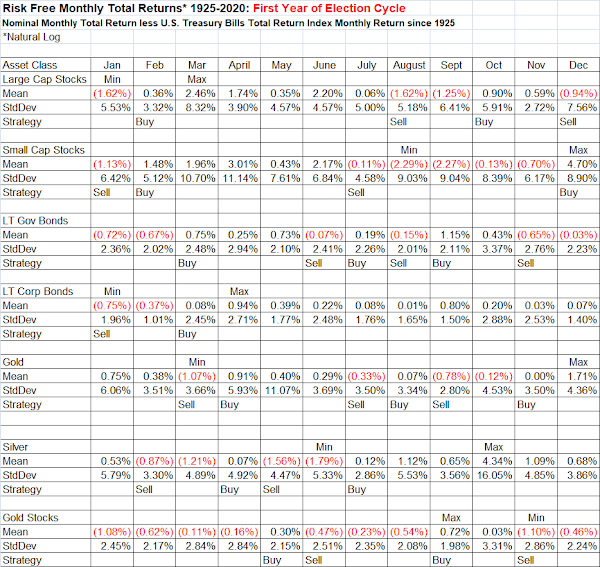 * The tables shown below are found in the LT SEASONAL CYCLES section in the Trends Tab of the Matrix (Line 135). The computer updates these tables every month.  Subscribers should keep track of the changes.  Stocks will enter the second year of the 4-year cycle in 2022.  This changes the seasonal tendencies.